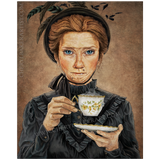 The first year students at the school are an unruly bunch of tricksters who would much rather prank professors and the poor janitor than attend to their studies. If that isn't challenging enough, it is rumored that a pair of red headed twins are a contributing factor to their shenanigans. A decision was made by the Headmaster that a particular Nanny with a certain set of skills would be hired to address these students. Starting immediately, McPhee has assured the staff that there are no limit to her arsenal of resources to whip these young troublemakers into respectable young witches and wizards. Students will soon learn they have met their match with McPhee!

This is the second teacher in my new collection featuring beloved characters from favorite childhood stories attending the School for Witches and Wizards. Check back often for more staff and teachers!

11x14 Canvas:
Digital oil paintings produced on canvas in limited production of multiple originals. Limited edition canvases will ship with a signed and numbered Certificate of Authenticity. Produced on 100% acid free canvas using archival ultrachrome pigmented inks. Each painting is created, inspected, approved, signed and numbered by the artist. There is a white border around edge for ease of matting.

No reviews.
Leave a Review

Mary Goes to a Magical School

Radagast Teaches at a Magical School